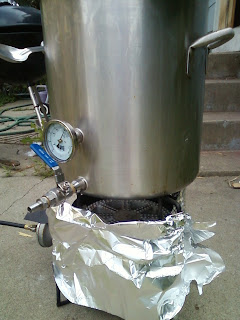 I was brewing on a Wednesday. It was the third batch outside on the Banjo Burner, a wind screen fashioned with Aluminum foil. It seems like a bitter northwest wind swept around St. Paul on that otherwise fair summer day. I woke up to that wind spreading word of the newest tent in the ongoing Minnesota state government shutdown circus: media outlets were warning Joe Six-pack that MillerCoors' MN state seller's license couldn't be renewed & their M-C brands were to be pulled from liquor store shelves.

In any other year, the expiration of a state license would set into motion the process of a renewal. This year, the civil servants that process state license renewals at the commerce department were laid off along with thousands of other state employees when elected officials couldn't come together & draft a state budget.


I checked my fridge & found two packs of Neobritannia yeast, perfect for brewing my mood: Bitter. The people at the capitol with the keys to the state beer fridge are busy participating in a shouting match from their respective offices. Today, they appear ready to threaten the availability and the industry of beer to drastically escalate political sentiments of otherwise friendly Minnesotans. I was ready to wage a common sense battle by way of a recipe, while taking care of my beer consumption needs.

While half my brain pondered base malt blends for the recipe, the other pondered the value of being a homebrewer. The hundreds of thousands of us who benefit from our liberty to produce beer in kitchens, backyards & basements have the pleasure of avoiding commercial interruptions to our beverage of choice. But as the sources of choices dwindle we are interrupting our culture of creation. Many could see glory for microbrew in the pulling of MillerCoors brands from shelves. But the time will come when smaller breweries also get shut out from license renewal if this government stalemate is prolonged.

After a quick bike around town for the goods, I mashed in a 2-row/Ashburne Mild/Aromatic malt blend. I recall it took a respectable amount of 16 oz. cans from Surly Brewing, before I could pick out the flavor of Belgian Aromatic malt. In conjunction with the Surly pro series kits, I learned how Aromatic can fulfill recipe aspects ranging from light toasty notes to a wall of pleasant malt sweetness for hopbursting. If I were a beginner & couldn't buy Surly because the brewery or liquor store were unable to be re-licensed, my education in brewing would be unfairly set back. Strange how legislators worked together this session to unanimously pass changes to the law & allow breweries to tap & sell their offerings on-site, yet now those same legislators are unable to come together so brewers & liquor stores can receive sales licenses. Political culture should learn from beer culture about how a few pints can bring together all sorts of people. 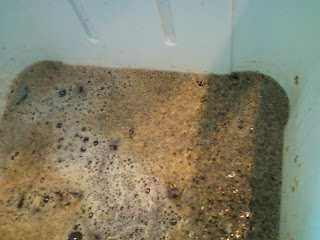 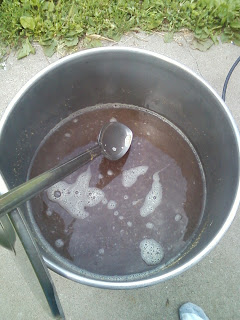 This was my first recipe to use Brewer's Gold hops. I'll try any North American grown hop that lists German Northern Brewer as a substitute. With some Fuggles added at 15 minutes to go & having miraculously not forgotten the corn sugar addition for gravity & dryness, the John Ireland Blvd. Bitter, named for the road leading uphill to our marble-domed capitol building, seems as good as ready to be poured in the glass.
--
John Ireland Blvd. Bitter - 5 gallons all-grain
5 lbs. Rahr 2-row
2 lbs. Briess Ashburne Mild Malt
1 lb. Belgian Aromatic Malt
2 oz. British Chocolate Malt
Mash at 152 degrees for 60 min, then mash out at 172 degrees & sparge to collect 7 gallons. 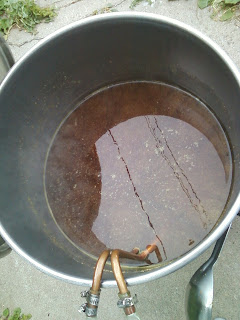 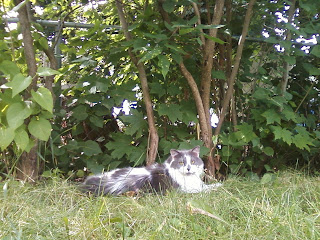 Bitter is a style that upon which homebrewers can really hone their skills. It's cheap to make, has lots of flavor & color interpretations, ferments quickly, and drinks multiple refreshing pints per sitting. It's a style not yet well represented on liquor store shelves, but I think it would suit most Minnesotans' feelings these days. Something to refresh one's attitude with plenty of subdued character & a brief hoppy kick to the tongue to get a dialogue going. But if you let it set around for too long without having one, it'll start showing a deeper side.

While homebrewing has my beer supply covered, it's not as fulfilling when access is cut off to the commercial scale side of the culture. Budgeting for homebrew supplies is akin to running the books at a full-scale brewery. Breweries that spend more money in court fighting a closed door at the capitol will have less funding for tours that could educate & inspire consumers. Future seasonal brews could be curtailed. Breweries could have less revenue to donate to homebrew causes like the AHA. We ought to work together to keep the entire culture of beer open for business so would-be and experienced homebrewers can have full access to the best the trade has to offer. It's all significant to beer culture whether it's a craft beer made for intricate flavor or a macrobrew created for refreshment & profit.

I brew for sustenance, hobby and culture. Let today's bitter one day be a liquid snapshot of one-day's fervor that MN lawmakers compromise & don't turn a vibrant beer culture against the people that helped make it that way. Hopefully I'm bitter today, and we all remain refreshed tomorrow.

"There can't be good living where there is not good drinking." -Benjamin Franklin