Notes on a Brewday: Scum and Villainy IPA 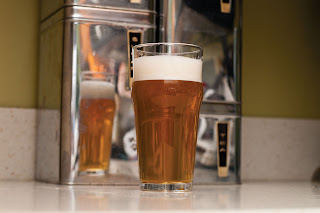 Do you like to brew? Do you brew ... frequently? Do you often find that there's still a beer actively fermenting even while you're boiling a new wort?

Back in the days of barm and godisgood and magic Viking brewing sticks, a brewer's fermentation population for each new batch came from the previous batch. These days the science is much more completely understood (plus our magic Viking brewing sticks are much more sophisticated and better-sanitized) and many, many pro brewers still use some variation of this basic technique - harvesting yeast from one batch to pitch the next.

German lager brewers historically applied (and still do apply) this kind of yeast-harvesting towards a different end: carbonating fermented beer. A quantity of actively-fermenting beer that has not quite reached terminal gravity is added to fermented, aged bright beer from the lager tank; the charge of yeast and unfermented malt sugars (not quite terminal gravity, dig?) ensure carbonation in keg or bottle; the significant trick is yielding the right amount of sugar (timing it so the actively fermenting beer is at the right specific gravity when you need it, and then getting the right volume for that specific gravity). An added benefit is that fresh, active yeast could reabsorb compounds like diacetyl and clean things up, flavor-wise, prior to packaging. The beer from primary from which the charge is drawn would still have kraeusen from the ongoing fermentation - hence the process known as kraeusening - you may know of it from recent marketing campaigns of a major American brand.

Anyway, leaving aside carbonation and getting back to the Scum & Villainy IPA (scenic route, dig?): I diverted about 800 mL of brown ale at high kraeusen into five gallons of cooled, aerated IPA wort. Big population of healthy, voracious yeast in prime fighting shape, no trub or hop debris to wash out of a slurry. Neato.

MAJOR CAVEAT: I do not endorse this as a substitute for a fresh pitch of yeast (or even recovered yeast from the bottom of the primary after the first beer is racked, for that matter) - a yeast starter is smarter, and a sure bet. If you want to try this technique, first make sure you have a pack of dry yeast on hand as a backup.

My experience has been that there is only a narrow window of time during fermentation that this trick will work, and that is during the absolute most vigorous phase - the first 24-36 hours of an ale fermentation (YMMV). Catch it too late, and the thieved beer may have a low cell count, leading to drastic underpitching, weak or nonexistent fermentation, flavor problems, and possibly the loss of a batch.

Now, if the timing is missed and you can't brew a new wort while the first beer is just starting to ferment; and if you're using a nice, strong top-cropping yeast, then you could wait until fermentation subsides and skim the floccs of yeast from the surface of the beer in primary, and then repitch that creamy, frothy goodness ... but that's skimming, and not quite the same as our barmy, low-fi, magic Viking yeast recovery method.
Posted by MD at 12:44 PM