The Truth Behind Beer Goggles 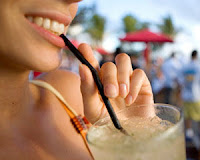 I came across a new study on The Beer Goggles Effect while perusing a food blog called Delish.


Who knew that men ogled more than women? A study recently published in the academic journal Alcohol examined why heavy drinking seems to increase how attractive people appear. The theory postulates that people seem more attractive to a drunk person because of a skewed perception of asymmetry in faces (NOTE: Pretty people possess symmetrical faces.). In order to test this hypothesis, both intoxicated and sober students were asked which photo in a pair was more attractive and which was more symmetrical. Men make fewer mistakes in determining facial symmetry - so, ladies, when a man says he thinks you're pretty (whether he's drunk as a skunk or sober as a stone), he really means it.

This information was scraped from this post on delish.com.

Beer and Your Body: The Beer Goggle Effect

Study Debunks The 'Beer Goggles' Myth?
Posted by Jeremy at 8:02 AM