So I've been reading some books about British pub beers and, in particular, the vaunted British Bitter. Needless to say, I was inspired to recreate the technique of the Brakspear brewery, which produces some of the finest brews in the UK. They use an interesting technique known as the double-drop fermentation and claim it produces unique flavors, especially in their Bitter.

The theory of the drop fermentation is to by gravity drop the actively fermenting beer from one vessel to another. Brakspear states that they ferment the wort for roughly sixteen hours in one vessel, then they open the tank and drop the fermenting wort vigorously into another fermentor to complete the active fermentation. Now you may say that this could cause oxidation in the beer, but because the wort is very actively fermenting at the time of the drop, the additional oxygenation and the rousing of the yeast actually enhance both the fermentability of the wort and flavor of the finished beer.

Most homebrewers have the capability to recreate such a fermentation process at home, with little to no additional equipment. I started the fermentation in my bottling bucket with spigot, and decided to live on the wild side by leaving the vessel open to the air for the first sixteen hours. 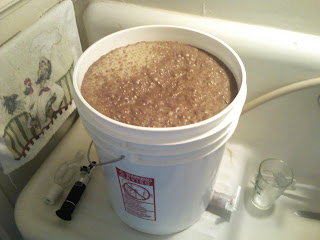 On my brew day I pitched the yeast at four o'clock in the afternoon, when I woke up the next day at eight in the morning there was a nice active krausen on the beer.

Next, I sanitized my six gallon carboy, a funnel and a couple feet of half inch siphon hose. I set up the bucket on my counter, the carboy on the floor with the funnel and attached the siphon hose to the spigot. Open, drop, and let it rip! 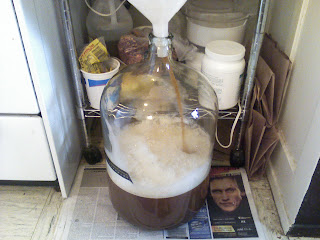 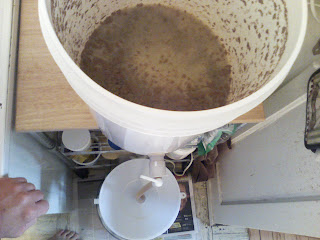 At the time of the drop, my gravity had dropped from 1.032 to 1.022. At the time of this post, the beer is happily fermenting away to its terminal gravity.
Posted by Jonathan at 7:22 AM