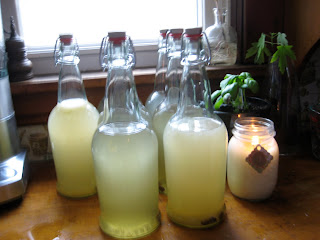 Sima, pronounced SEE-MAH, is the Finnish homebrew of May Day, known in Finland as Vappu. It is a brew that celebrates the light and sweetness of a new spring. 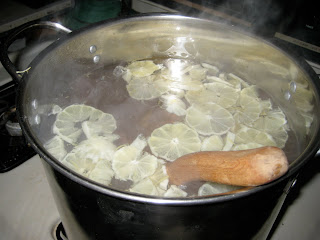 Sima is classified as a mead, but most recipes we’ve come across use sugar and molasses instead of honey, and typically ferment in just a week. Recipes vary greatly from a sparkling carbonated lemonade to a more serious, cider-like brew, and are as individual as the brewers themselves. Typically, Sima has a very low ABV ( <2%).>
Sara's interest in Sima was peaked in her youth, when she was attending Camp Salolampi, a Finnish language camp. She found a recipe for Sima in the back of a Finnish language and culture study guide. There weren’t many details in the recipe, or an explanation as to its cultural importance. Many years later, after developing an interest in brewing, she dug out that old study guide and the recipe for Sima. But, before we continue to explain Sima, Sara must explain something else - Vappu.

Vappu is Finnish for May Day. Typically Finnish holidays are celebrated at home with family in relative solitude and calm. Vappu, however, is a day of Carnival like proportions. Very few Finnish days are as social as Vappu. Although March 21st is the equinox and the official beginning of spring, May 1st is when spring is grandly celebrated and welcomed. It begins the evening before May 1st (Vappuaatto). People take to the street, head for the outdoor parks, or to local restaurants. There are parades and festivities abounding. Vappu has pagan roots, akin to all spring celebrations, and was among those Northern European spring celebrations eventually Christianized as Walpurgis Night. It more recently evolved to become a workers' celebration and students graduation party. Vappu is especially important to students. Graduates of all ages put on their graduation caps and pick up a bottle of Sima.
Which leads us pleasantly back to our spring brew. Below is what you will need make two gallons of Sima: 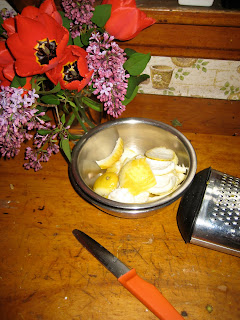 Sima (2 gallons)
------------------------------------------
Clean and sanitize your fermenter (3 gallon carboy or Better Bottle). Bring 2 1/4 gallons of water to a boil in a kettle. As water heats, scrub the lemons. Grate the zest from the lemons and set it aside in a small bowl. Peel or cut off the pith (the white part of the peel). Slice or chop the flesh of the lemons, removing the seeds as you go, and add to the bowl of zest. Once the water is boiling, reduce the heat and add the sugars and lemony goodness. Stir until sugar is fully disolved. Remove from heat and bring the liquid to room temperature with a chiller or ice bath. Transfer everything to your fermenter, including the lemon flesh and zest. Add yeast. Seal with an air lock and leave at room temperature for 48 hours. At bottling (we used 1 liter clear EZ-Cap bottles, which looked beautiful)., fill each bottle and add some raisins. When the raisins rise to the top of the liquid, the Sima is ready to drink. 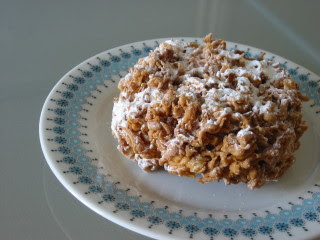 Sima is a May Day drink, but can be enjoyed throughout the spring and summer. To go along with your Sima, try making some traditional Finnish May Day Tippaleipa (recipe from famous Scandinavian chef, Beatrice Ojakangas)
Kippis!
- Autumn Connell & Sara Hill
Posted by Unknown at 5:29 AM