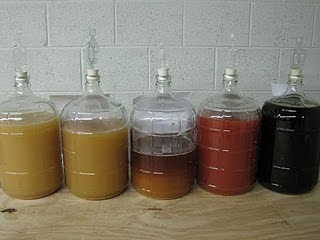 I recently discovered that bees make honey. Shortly thereafter, I learned that honey makes mead. And here I was under the impression that everything I need to know, I had already learned in kindergarten ... way to drop the ball on that one, Miss Eckhert!

Once I finally worked out how to read good, I scanned the words of Kenneth Schramm and then took it upon myself to watch the magic of meadmaking in action (Check out the lighter one on the left, OG 1.080). Then I was informed that a blend of barley and honey is called a braggot (or bracket) and so I brewed some using chocolate malt (it's the dark one on the right, OG 1.200+). Well, then I had an affair with some Vidal ice wine juice that I blended with honey to create a pyment (it's the other lighter one, OG 1.115). Then, somebody sold me some cherries, so I dropped a bunch of them - as though they were hot - into some honey, which then became a melomel (see the red one? OG 1.080). Wow, how fun!


Then I skimmed an article in the Dec 2008 issue of Zymurgy in which Mr. Charlie Papazian wrote about partying like it was 1949 in which he got to sample a baffling beverage called bochet. Interestingly, a bochet is made from scorched honey. Well, I just couldn't resist slapping some honey on a burner and watching it brown (feast your eyes on the half-full carboy in the center, OG 1.096).