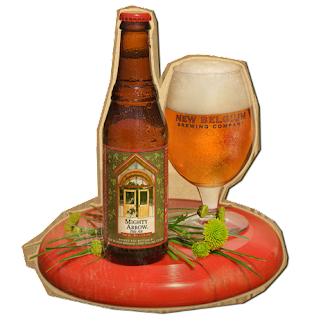 Bring forth the pale ones!

As the out-of-doors world wakes up & starts to smell of nature, the season ripens within pint glasses as pale ales come into their season of specialty.

Me, I'm not one for lagers or shandies. If you leave 'em erstwhile on the porch or picnic table too long they'll lose some of their agreeable flavor in the heat. Now a pale ale, here's a beer that morphs a bit on the palate after a break from the lips; especially when you're weaving several hop varieties into one glass.

That being said, I was on the outlook for warmer days, approximately five weeks out, with this past weekend's brew: a New Belgium Mighty Arrow clone!

I haven't met a brewer that doesn't have a constructive critique for most of New Belgium's brews. A great deal of brew folks actually cite some fairly stringent style flaws in their offerings, not the least of which being Fat Tire. Here, I believe there's a psychological animus at play. The 'Belgium' moniker is deceiving to those who critique by style; Fat is a Colorado brew, pale & borderline malty, with a color that points some noses across the Atlantic. It's simply playing too much into some tasters' sense of direction.

I consider New Belgium's offerings to be well-marketed, and becoming well-distributed. My target brew, their Mighty Arrow, adds another pale ale to their unique bottles. And Arrow is poised to capture the same crowd that made the leap to microbrew for Fat Tire. Straight out of the fridge, this ale has a balanced veil of bitterness; sit with it for awhile & resinous citrus from Cascade & Amarillo come forward with an almost Simcoe-like taste, leaving the Goldings character somewhere below this fruity dance.

The bottle gives an ABV of 6%; with Cascade, Amarillo & Goldings for 35 IBU's. Honey malt is the only grain propping this tamed beast up, so I'm looking for a mash temp a tad lower than my usual brews: 149°F. should keep the sweetness in check. I like Cascade's clean bitterness, and it's certainly a good citrus flavor for the main bitterness component. I'm going to sneak the Goldings character into a small flavor/aroma addition. I haven't used Amarillo in some time, and it pains me to say so; it's a damn fine breed and I'm glad to throw some in.

Chill to 66°F. & pitched two packs of Y1056.
Will ferment for three weeks, keg condition for another two.

Update: Crazy blow-off on this batch! Airlocks not recommended!
Posted by Steve Scott at 8:03 AM