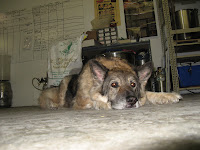 Brew day! English ale = bored dog. She only likes lagers.
Pale mild ale. Trying out a sample sack of a new (to me) malt. New crop EKG ... heaven. Splitting the batch: open fermentation with one half, closed with the other. 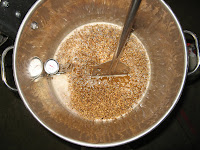 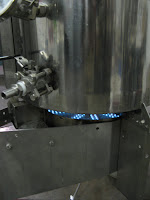 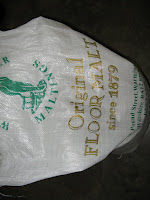 Strike water on the left ... Westminster floor-malted Maris Otter (my notes: small kernels, steely for a UK pale malt ... flavor of kernels & aroma of mash reminiscent of lager malt, very doughy, a little DMS - very bready, very nice!) ... coming soon to a homebrew shop named Northern Brewer near you. On the right: what appears to be a comically oversized tun ... hey, it's a small mash. I'm not embarrassed. 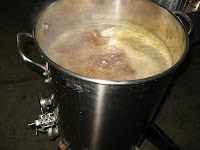 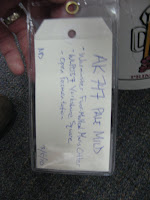 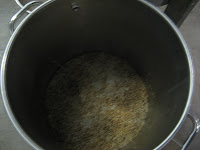 Left: a nice boil. Middle: I hate cleaning mash tuns. Right: I should've called it AK-037 'cause of the WLP037 yeast. Now this beer is forever burdened with a complex pun (McMullen's AK Mild from Hertford; the Kalashnikov; and the Boeing) for a name. And it's only 1.034. That's more pun than beer.

Chill, aerate, pitch, seal/leave uncovered. Fast forward to the end of Day 2. And now it's high krauesen and time to do some skimming on that open fermentation with some thoroughly sanitized hardware:


Yup, she thinks British ales are boring. No accounting for taste. 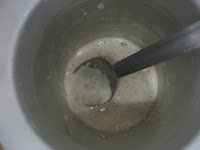 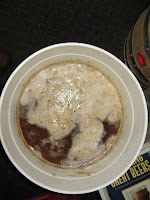 On the left, a shot of creamy yeast from the second skimming on Day 4, which is now under some wort in a flask, waiting for the next brew day. And if you'll skew your peepers starboard, the just-skimmed green beer starts to throw up a new, final krauesen.

And on Day 5 he racked to closed secondaries. 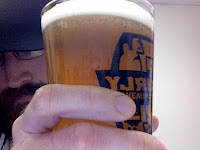 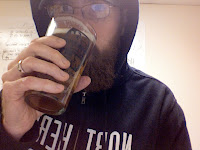 On Day 19, into the keg and force-carbed to somewheres around 1.6 volumes (which felt a bit like pulling a punch ... next time I brew this: cask-style).

And what did he taste? Well ... from the open-fermented, WLP037 batch: a beguiling complex of wildflower honey, biscuits, fresh bread, and a striking but not unpleasant waft of sulfur you'd normally expect to find in a pale European lager. Some buttery and citrus fruit notes from the yeast, and a light, obligingly chuggable body. There's some of that good EKG flowers-and-earth in the flavor, but it's almost an afterthought. 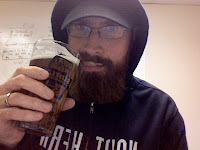 Oh, and the recipe: