Get Hip to (Your Own) Hops 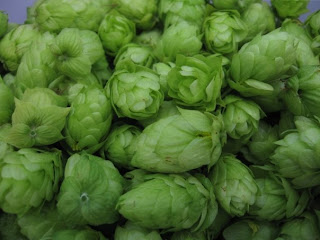 
Spring 2009 was the first time in my adult life that I didn't live in an apartment and finally had a yard to stretch out in. So I decided this would be the year to try and grow my own hops. I had been researching the process using magazines, books and online resources. Thankfully, early in the season, a friend of mine was cutting a giant hop vine root ball out of his yard to transplant to another property.

New yard + nice supply of free rhizomes = Why the heck not?

I cut about a half-dozen rhizomes from a portion of the giant root ball. It was a well-established Fuggle plant. My buddy suggested that any rhizomes I planted might not bear fruit because it would be a first-year transplant. Traditionally, brand new rhizomes will grow vines, but will not produce much in the way of cones for two or three years. The point of this project was to experiment, so I really wasn't too worried about having a yield. Plus, my theory was that if the rhizomes were four years old, transplanting would not revert them to year zero, but would start them where they left off in his yard.

I started by following the advice of Chris Colby from Brew Your Own magazine and one of his articles about growing hops in containers. Because this was my first attempt at growing hops, I didn't want to go overboard and Colby's container set-up seemed accessible, easy-to-build and spatially efficient. He suggests putting a long post in the soil before you plant so you don't injure the rhizomes after-the-fact. I bought a 7ftX1inX2in post for each container and attached an eye hook to the top of each. Put the posts in the soil and secured them with packed soil. Next, I tied twine to a stake that goes into the planter opposite from the post. This twine goes up to and through the eye hook, then wrapped around the eye-loop, brought back down to the soil level and tied it off to a second stake. Now there were two lines for the hop vines to grow up. [I quickly realized that I would be abandoning Colby's advice at this point - due to different circumstances. See his article for more on a method of "drop twine growing" (my term, not his).]

In each of the 16-inch containers, I planted one healthy looking rhizome (already sprouting roots at the ends) horizontally about six inches deep in store-bought potting soil. I do believe that potting soil contributed to the eventual success of this pair of rhizomes. I also planted two rhizomes in yard dirt against the south wall of my house. As you'll see later, they did okay, but not like the potting soil/container group. After planting the rhizomes in the large containers, I put up some medium wire mesh around them to keep out rabbits and squirrels and such. To review quickly - at this point I have two large planters with a large post and twine from soil to post-top (looking like a farmer's wash tub bass) surrounded by critter-proof fencing. 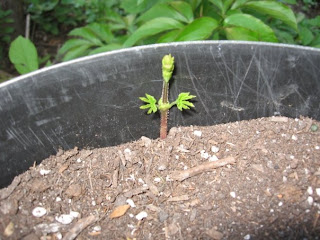 Within two weeks, the first sprouts appeared along the wall of the planters. They initially looked like small green shoots of asparagus. And everything you've heard is correct - they grow insanely fast, sometimes more than an inch in one day. According to my resources, you choose the strongest stalks in the first month of growth and cut away any others. You want to concentrate your growing energy to a few dominant vines. It wasn't raining much last spring and summer, so I was watering each planter with a gallon of water every other day. Again, check other resources for more formal watering advice.
The vines took off. Once they are tall enough to reach the lines you provided, you'll need to "train" them to grow. Do this by twisting them clockwise around the line for a couple of days. I trained two vines up each line. Soon enough, the hops learn the way of the walk and start growing around the line on their own. It is rather freaky. My hops quickly outgrew the seven feet of line I had provided and Phase Two of Operation: Backyard Hops was underway.

My next mission was to provide more room for the hops vines to grow. 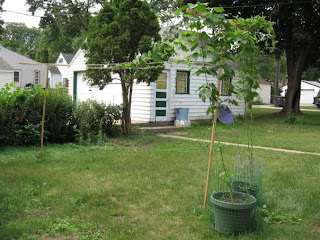 I decided to go horizontal. I bought two more 7X1X2 posts (this year I will buy thicker/denser posts) and built two large T-shaped post with two eye hooks on top of each. I put the posts a foot into the ground about 20 feet apart from each other. Then I ran the existing twines from the planters to the new post and twisted the vines onto new lines that stretched across the 20 foot space. Your basically building a clothesline. If you already have a clothesline, or at least the posts for one, you're a step ahead.

Again, they took off like mad. A little extra training was required until the vines got used to growing "across" instead of "up." 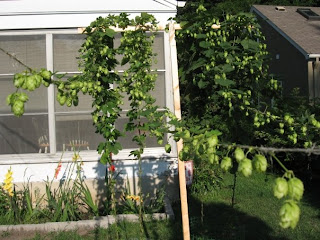 Maintenance is minimal, but there are a few things you'll want to do including:
- Keep vines well-watered
- Cut shoots that emerge from the soil
- Cut "side-vines" that start to grow from the bottom foot or so of your main vines (keep the energy focused!)
- Prune any dried or pest-ridden leaves
- Fertilize (I didn't, but some say you should)
In mid-summer, I started noticing small yellowish-orange "hairs" and the increasingly familiar form of a hop cone emerging. The kids were growing up so fast.

The time to harvest is different for everyone depending on your variety, geography, climate... perhaps even based on your intended use. Consult print or online resources to help you determine when is the right time. There are rules of thumb for harvesting based on appearance, texture, amount of lupulin, and aroma. Being my first batch, I grew concerned that I was waiting too long and I harvested early (mid-August). From the dozen-plus hops I left on the vines as an experiment, I found that I would have been better off waiting almost another month. The cones grew larger and, my goodness, the aroma was so much more intense! 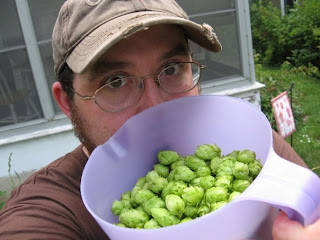 I carefully plucked the green beauties from the vines. Though I didn't have the means of making an official weight measurement, I can tell you the hops filled a one-gallon pitcher one-and-a-half times and when laid out to dry fill two large window screens. Not bad!

My first plan was to dry my hops out in the garage, but it ended up being too humid as was the screened-in porch. I ended up putting the screens in the basement with a floor fan blowing across them and a dehumidifier running nearby. So, I sort of compromised heat for dryness, which worked out just fine. After three days the cones were papery and didn't rebound when pinched, both good signs that moisture has been pulled from them. There is such thing as over-drying, so again - check your resources for information on the process.

Email ThisBlogThis!Share to TwitterShare to FacebookShare to Pinterest
Labels: homegrown hops, hops, how to, ingredients