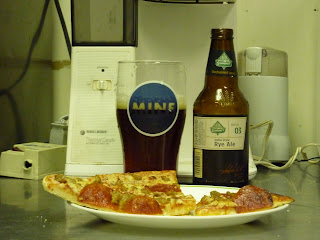 Last weekend I picked up Summit's new India-Style Rye Ale (IRA) and have to say that I'm impressed.
Most other so-called "Rye PA's" I've tasted are just IPA's with Rye malt, which is to say basically a more silky version of the style. This beer mixes a Roggenbier and an IPA more thoroughly (for more information about Roggenbier check out the BJCP Guidelines). It retains the Dunkel-like maltbill of traditional Roggenbiers while keeping the hop schedule and yeast of an IPA. So you get a pronounced citrusy and earthy aroma and a heavy bitterness at the finish, but the flavor is more malty with a good amount of caramel and a chocolatey spiciness. The fruit and clove flavors you'd get from Roggenbier yeast is absent but that rye silkiness is still there in the body. I drank mine with a frozen pizza, but I think it would pair equally well with a rotisserie chicken or a grilled pork tenderloin.

The India Style Rye Ale is the third in Summit's "Unchained Series." The idea behind this project is that each of the six brewers will get to take the reigns on a beer that the brewery will release for a limited amount of time. Mike Lundell is resposible for the current release. Here are the specs that he provides (which are displayed on the packaging):

The first two beers in this series were a Kolsch and a Scottish 90 /-. I really liked the Kolsch. It's pretty rare to see a domestic example of the style (yeah, I know it's not REALLY a Kolsch unless it's made in Cologne), and an even bigger treat to taste one that's made well. My memory of the Scottish 90/- is a bit hazy, but I remember liking it. Mostly, I'm impressed that Summit has responded to the demand for more interesting craft-brews in an innovative and skillful way.

This weekend I went out and bought a second six-pack and have been handing out IRA's to some friends, encouraging them to pick up a sixer for themselves. When you see this beer in a bar or a liquor store I'd urge you to buy some, not just because it's worth drinking, but because it's worth supporting a brewery that takes chances while maintaining balance.
Posted by Pagoism at 7:46 AM