Brewing Rigs I Have Known 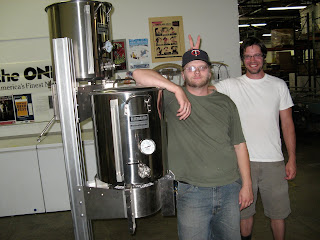 Have you ever stopped to track, or at least consider, how your brewing rig has changed over time? And what it means for your beer? What it says about your relationship to homebrewing?

#1
When I was a young man and in the apple-cheeked spring of my homebrewing life, I had a bucket and a carboy and a five-gallon stockpot. Wort would get boiled in the communal kitchen of my dorm, fermentation would proceed in the closet of my room (clothes were stored on the floor, in case you were wondering). In the tiny fridge lived a crappy mini-keg system, and those work-study checks got turned into malt syrup, hop pellets, and brewing books with the reflexive quickness of an addict. Eventually I was even propagating yeast starters on my desk.

Brewing my own was at first a workaround for age-related obstacles to beer access, but it quickly morphed into something much bigger. It only took one batch to give my whole life a new vector. Quality over quantity. Explorations of history, culture, technology, and taste through the medium of fermented malted grain. Charlie P.'s Complete Joy, Mosher's Brewer's Companion, and Jackson's Beer Companion were my toboggan down the slippery slope into full-on nerdery.

A recipe of my own devising from those days (no surviving notes, so reconstructed from memory - caveat emptor):

Fian Coirce Stout
In reference to the honey and the oats, the name was construed (by me and a thin Gaelic-English dictionary)  to mean "Wild Oats" - I'm sure someone from the Gaeltacht could correct me; the oats and wheat DME were a bid to make it creamy like draught Guinness.

Beer had become a true passion by this point, and my operation in these years reflected a desire to go the distance, quality-wise, despite limitations monetary or spatial or in fact safety, that was at times perhaps ... mmm, single-minded? Overzealous? OCD? Alienating? Awesome?

After three years of dorm-room brewing, I was released into a world where I could:

a. go into a liquor store and buy any beer I wanted, and thus did I fall in love with lambic, German
and Czech lagers, Scottish ale, London porter, and Kentish bitter; and

b. rent an overpriced but comparatively spacious apartment.

I had some graduation money, and I spent it on a ten-gallon kettle, a soda keg system, and a chest freezer with an external thermostat. And in all of the time suddenly made free by the absence of homework, I read Noonan, Miller, and Fix.

So I had the gear, and, by the standards of homebrewers circa 1997, I had a pretty good handle on theory, but, in retrospect, displayed a dismaying lack of common sense: in the galley kitchen of my overpriced but comparatively spacious early 20th-century St. Paul apartment, I used to dead-lift a five gallon bucket full of 170 F sparge water onto the top of the fridge so I could gravity-feed into my Rubbermaid mash/lauter tun (on a milk crate on the counter) and in turn gravity-feed from the MLT into my pimpin' brew kettle, perched on a rickety gas range not much bigger than said kettle.

Nobody ever got hurt.

Shandon Bells Porter
Mashed at 154 F, fermented a total of 10 days at 68 F and then to a keg. Tasting notes from October 20 say it was "smooth, chocolatey, and well-balanced."

At least something was balanced!

#3
Now it's 2004. Dog, house, yard, garage, basement, married to a girl who likes beer. A good friend who taught me how to decoction mash once told me "Make sure you get everything you'll ever want for homebrewing gear before you get married." But since my wife likes beer, I've never had to cross that Rubicon. Lucky dude.

This iteration is my current rig, and it reflects some bows to practicality if not slightly better sense. Efficiency is pretty key, but not as measured by the metric most homebrewers think of: time, not ppg. Hours for brew-sessions are harder to come by these days.

So I flex-brew: ten gallon AG batches yield 100% more beer for about 25% more time vs. five gallon AG; but partial-boil extract batches keep pints filled with great beer and fit nicely in and around day-care shuttling, loads of laundry, and cooking dinner.

A propane burner shaves time off waiting around for wort to boil. A pump moves sparge water to the HLT, which is no longer situated above my head. A 14-gallon Fermenator fits an entire 10 gallon batch, lets me easily harvest yeast for repitching, saves the trouble of racking to a separate secondary, and through money saved on smack-packs it will eventually pay for itself ... mainly, the salient features are that it looks like R2-D2 and it's full of beer.


Flippin' through the logbook from the last six years at random, here's one from the vault - ten gallons of a guzzler brewed back in 2007 for my brother's summer wedding: