Be the Envy of Your Peer Group 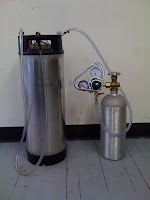 I do not miss the old days of bottling. In fact I loathe them.
Dishpan hands, interminable dirty bottles, sticky floors, wasted beer, inexact carbonation... and O! the time. The time spent on a weekend afternoon, a slave to the kitchen, hunched over a linoleum floor paying homage with dribbled beer sacrifices to the bottling gods.

In the end you have to ask yourself what your free time is worth. With a kegging system, in the time it takes to wash, sanitize, transfer and package 50 odd bottles of beer, you could wash and sanitize your keg, fill it, carbonate it, make dinner, go outside for a run, brew another batch of beer, cure world hunger, blow your own glass bottles... well, you get the idea.

My friends and I started kegging only 1 year after we started brewing and considering there were 4 of us there every brew day taking care of the work load speaks volumes to just how frustrating bottling can be.

Life in 2004 A.D. (After Draft) was a breeze compared to 2004 B.C. (Bottle Conditioning). Once we had our system set up, instead of pain staking attention paid to every 12 ounces of beer, we simply started a siphon and let all 5 gallons flow right into the keg. Plus, cleaning and sanitizing a keg is an absolute cinch, especially if you're good about rinsing them out thoroughly once they've been cashed.

And the best parts come when the beer is finally in the keg. 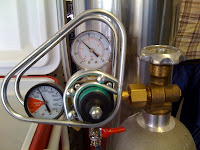 Carbonation
First of all, your beer can now be carbonated in less than a couple hours hours if you'd like. Turning the pressure way up and shaking the keg like a crying baby (note: northern brewer does not condone the shaking of crying babies) for 10-20 minutes will get you to where you want to be (especially if your secondary was already cold before you started the kegging). Thanks to the the regulator and because you know exactly what temperature your beer is stored at, you can easily figure out exactly how many volumes of CO2 you're putting in your beer. No more opening up a bottle of homebrew only to realize it's under or over carbonated, or is inconsistent from bottle to bottle. 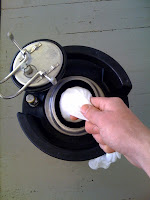 d Easy Dry Hopping and Secondary Additions
Second, any late secondary additions you'd like to make to the beer are now at least 42.87% percent easier (we've used rigorous testing standards to establish this). Just open the keg lid, add your additions in a muslin or nylon bag, and put the lid back on. When the flavor has hit it's peak (which is much easier to test now that you can pour yourself a tiny sample rather than wasting an entire young bottle) just take off the lid, remove the bag, and put the lid back on. Boom. Done. Throw in whatever you'd like: oak, dry hops, spices, chocolate nibs, meat (not suggested)... If you're adventurous, you can leave your addition in until the last drop and explore the way the taste profile changes over time. I once made a Bourbon Barrel Porter that stayed on tap for about 9 months with the oak additions still floating in there. It only got better and better. 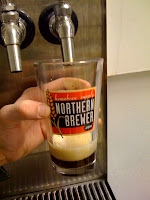 ong Shelf Life and Small Samples
Third, as just mentioned, your beer is going to last for quite a while on tap. Since it's stored under CO2 and never exposed to oxygen, every pour is going to be as fresh as the first was, or as a newly opened bottle would be. In fact, seeing as how no light is going to get into your keg to denature hops and no trub is left over from bottle conditioning for the yeast to reconsume, I would argue that your beer is going to last even longer in a keg than it would in the bottle (assuming your consumption volume doesn't proportionally increase with the new found ease of pouring yourself a glass, which is doubtful). At some points, all beers are going to die from old age, but again, with the ability to take small samples instead of opening whole bottles, you can have a much better gauge on the life cycle of your beer. 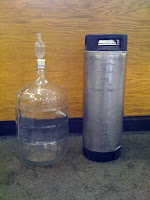 ermentation
Fourth, remember that one time that you wanted to brew but you just didn't have the capacity in your carboy stock? Well brew away my friend, because your keg just doubled as a secondary fermenter for you. This is what friends do for one another. Throw (on second thought, siphon) your beer into a keg, add a squirt of CO2 to seal the lid and leave it in the corner to condition away. This is especially good for long term secondaries, because there's no light getting in and no air lock to go dry. Plus, kegs are pretty indestructible, so when your house explodes because you're ignoring the warning label on your turkey fryer not to use it indoors, rest assured that your keg conditioned beer is probably going to get retrieved intact from the rubble. 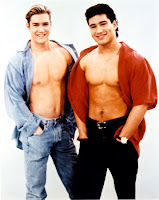 Fifth, you're going to be awesome. Let's face it, you will be the envy of your friends. Your parties are going to be the best, and everyone is going to want to be your friend. Call that kid in high school who hated your guts while simultaneously making your life miserable and tell him you keg your beer now. Instant remorse. I wouldn't be surprised if he asked to come over and hang out with someone so spectacularly awesome.

Especially if you have a kegerator.

But that will be be the topic for a future post. I'll tell you how (and why) to build this beauty: 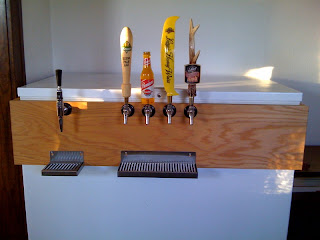