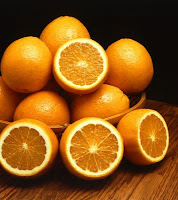 I opened my fridge one morning and poured myself what I expected to be a nice glass of OJ, but it smelled like Pee-Yew (much like rotten veggies and diaper)!
I checked the date stamp on the carton which told me the OJ was months past its prime. It was probably some gram negative bacteria like Escherischia coli or possibly Citrobacter, which can be seriously harmful if ingested. They prefer to live in human intestines, but sometimes they travel. Gross! I immediately decided to make citrus wine, but wasn't sure how to do such a thing without using enteric bacteria. I Googled it. I found an article written by John Peragine from 2006 in Winemaker Magazine about Citrus Wine, which is totally worth a gander.

The recipes given in the article include additions of sugar and water, which I omitted from my recipe - I only used fruit which gave me about a half gallon of juice at 12 Brix:

The juiced carrots were added to balance the pH (my carrots have a pH 6.30, where the oranges were pH 3.20, the grapefruit pH 2.57, and tangerine pH 3.23), which settled at 4.01 without the addition of any acid blend or carbonate or anything. Pow!

After fermentation, my wine smelled like Pee-Yew. I fixed this by aerating my wine (splash racking). Some of the smell is still lingering. I neglected to add more nutrient after pitching and the wine is now suffering for it. 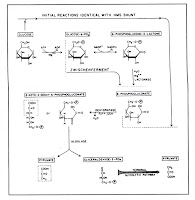 Citrus Wine, like many country wines, can be a little troublesome to make. Low Nutrients and low pH both tend to be issues that can push yeast into utilizing metabolic pathways such as the Entner-Doudoroff (ED) pathway [depicted to the left]. Ideally, fermentation runs through the Embden-Meyerhof-Parnas (EMP) pathway: 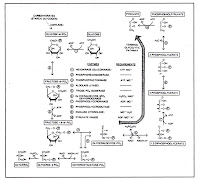 OK, I gotta get back to cleaning out my fridge. Anybody need some Penicillin?
Posted by Jeremy at 7:37 AM