An Ode to Bitter 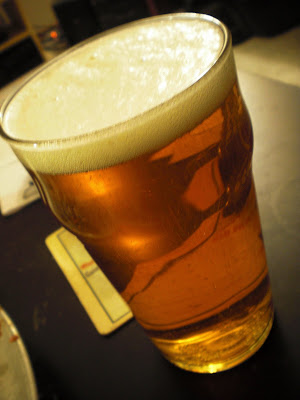 
Bitter originated as part of - or as an off-shoot of - pale ale in Britain. The name 'bitter' can be intimidating to new beer drinkers and brewers but it's really a bit of a misnomer. It was initially called bitter to differentiate itself from mild ales (it is more bitter than mild ale, but dark chocolate is more bitter than mild ale). The flavor profile of bitter should have some focus on the malt as well as the hops. Bitterness should be used to balance the malt, not to deliver a roundhouse kick to the taste buds. I like to think of bitters as mini-English IPA's. A firm bitterness, some body and malt character, and light hop aroma complemented by esters and malt aroma.

There are so many ways to brew bitters, and even commercial versions in Britain seem to vary pretty wildly as far as color and actual bitterness go. They can run from pale golden to dark amber, and almost red. You could generalize and put them in categories of drier and sweeter bitters. Both should have enough bitterness to balance the malt, and for me, this is the key. Balance balance balance. We're not brewing IIPA, here. Sweeter versions of bitter should have some caramelly and toffee-like malt flavors. Dryer versions can be lighter and a bit more quenching. The recent trend of English summer bitters, which might be something like an English bitter version of cream ale, would fall into the latter category.

If you're brewing all-grain, you can mash higher than you might think. I find that 154F is a good temperature. English Maris Otter will give you a good amount of malty breadiness, but just a touch of amber malt or biscuit malt (I like about 3%) can give it another dimension. I find that you can easily overdo crystal malt in these styles. Sweetness isn't the same as maltiness, and you don't want to hinder the session quality of these beers. I never use more than 10% crystal malt in the caramelly versions and usually shoot for about 6% in the drier bitters.

Hops seem to be a free for all. I prefer British varieties that lend some earthiness and fruit with a nice level of bitterness without being too smooth or harsh. A BU:GU ratio of 0.6:1 for your bittering charge will give you the impression of bitterness without over doing it. Boadicea hops were fantastic when they were available (I'm hoping we can get some more this year) with a grassy, earthy quality that was very nice. British yeast might be the single most important component of a complex bitter. I prefer yeasts like Wyeast 1968 or 1187 which contribute esters without dominating. Wyeast 1882 is a great choice as well.

Here's a recipe I brewed that turned out well:

Mash at 154 degrees for 1 hour
If you adjust your water, shoot for around 100 ppm SO4 and 50 ppm chloride with minimal carbonates.