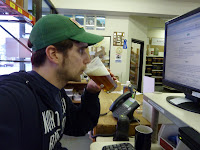 On-line brewing calculators can help you figure out questions as simple as what you should expect as a final gravity, or as complicated as what color beer you will get with which grains. Here are a few that I use on a weekly - if not daily - basis:


Mike's Brewing Calculators - Usually when people ask me what kind of final gravity they're looking for, or what the alcohol percentage of their kit should be, I'll send them here.

It's got a couple of pretty simple calculators and should only be used as a rough guide, but I think it's useful.

N.B. Using an unfermentable sugar like lactose or maltose that will skew your results in the second of Mike's Brewing Calculators (the one where you enter what yeast you're using). To make the adjustment just add the gravity points of the unfermentable sugars divided by the number of gallons in your batch (i.e. 5) to the final gravity given in the calculator.

For example, if you're making a Northern Brewer Sweet Stout, you'd put the OG at 1.042 and the yeast as the Wyeast 1028. The calculator gives you a final gravity with the range of 1.010-1.011. You'll never get there because you added a pound of lactose. I'm still waiting to get a definitive answer form our supplier, but as far as I can tell lactose adds about the same amount of gravity as corn sugar (which is about 35 points per pound per gallon).

So if you add 1 pound of lactose into a five gallon batch you'll divide 35 pounds by 5 gallons to get 7 gravity points. The 7 gravity points is already figured into the Original Gravity, but we'll need to add it to the final gravity estimate. So, the 1.010-1.011 Final Gravity becomes approximately 1.017-1.018 give or take a few points do to other variables - e.g. actual batch volumes, gravity points variability in the extract, the amount of yeast you pitch....

Homebrew Refractometer Calculator - If you are willing to spend the dough for a refractometer, this page is really helpful. It mostly converts your brix readings to specific gravity, which is especially helpful for the final gravity. It also has a calculator that will give you the Original Gravity post fermentation from the final refractometer and hydrometer readings (this doesn't work if you've back-sweetened anything).

By the way, if you're an all-grain brewer and don't have a refractometer, I'd totally get one. They're awesome and really useful. They're not flimsy like hydrometers and, since you only need a drop of liquid to get a reading, you can find the gravity at several points through the batch. This way you can tell the gravity of the wort that your collecting during lautering. This helps let you know know if you're collecting at the proper rate and if you need to stop collecting. You can also use it before you boil to make sure you're at the correct pre-boil gravity. This way you can make adjustments before the boil takes place.

TastyBrew.com Calculators - I usually just use the infusion calculator on this site when I'm doing all-grain batches or partial mashes. But there's a bunch of useful stuff here. I used the Complete Recipe Calculator for a while before then I switched to the Beer Recipator.

The Beer Recipator - I usually use the spreadsheet (recipe calculator) on this website when I'm making up a recipe. The first time I used an on-line recipe calculator I just adjusted grains and hops to coincide with the style guidelines given for a German Alt. It ended up tasting like a syrupy Porter: not the result I was looking for. Then I picked up a copy of "Designing Great Beers" and found that it complimented the Recipe Calculator so well that making my own beers became pretty easy. When "Brewing Classic Styles" came out, I became invinsible.

I like The Beer Recipator more than other on-line calculators because it let's you adjust stuff like degrees Lovibond, extract potential, and the name of the ingredient. So if I'm putting in some Simpson's Golden Promise I can actually adjust the grain bill to the exact specs that I've been given and change the name to get as specific as I want (so I could write "Simpsons Golden Promise: 2° L" instead of "British Pale Malt"). This is especially nice when you have a type of grain or hop that is not listed in the "ingredients" field.

A lot of people use BeerSmith and I think it's an awesome program. But I like this website because it's free, can be accessed almost anywhere, and works on Linux computers. My biggest beef is that they seem to choose fairly arbitrary style guidelines. I tend to prefer the BJCP (Beer Judge Certification Program) guidelines myself as they seem to be more of an industry standard and if I want to enter a beer into a contest those are the standards by which I'll be judged.

The Recipator has a priming sugar calculator as well. I usually use a little graph in "How to Brew" when I'm measuring out my priming sugar, but that graph only helps with corn and table sugar. This one has the info for honey and DME (dry malt extract) as well.

There is also a hydrometer temperature adjustment calculator. Um, thanks guys.

Mead OG Calculator - The title of this one really sums it up pretty well. I've found myself using it periodically when making mead to figure out how much honey I want to use, and to find out how much water I'm going to need to add in order to hit 5 gallons. I'd recommend ignoring the "Honey Moisture Content" field.
Posted by Pagoism at 10:52 AM