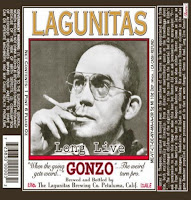 Among the ranks of celebrity homebrewers: Dr. Thompson himself.

At left is a label from one of the many Hunter S. Thompson inspired craft brews, a cursory (no pun intended) internet search reveals at least seven different beers using "Gonzo" in the name. Those of you who have read some Hunter S. Thompson know that his work typically contains hazy and frantic recountings of the virtues (or at least, effects) of various drugs, including his well known predilection for Wild Turkey bourbon. However, few may realize that Thompson was in fact a homebrewer for a time, and a very early homebrewer at that. In his book "The Great Shark Hunt", a collection of essays on topics ranging from Watergate to the Kentucky Derby, he tells the tale of two Beatniks gone crazy after drinking a batch of beer straight out of the carboy. Who can't relate to the timeless story of a homebrewer's housemates starting in on the beer a bit early and without really paying? I'll quote a small bit here for you so that you can get a glimpse of homebrewing on the fringe in the early 60's:


"I was making my own beer at the time and Willard put a great strain on the aging process; I had to lock the stuff up to keep him from getting at it before the appointed moment... Willard arrived shortly before I packed up and left for the East; we had a convivial few weeks, and, as a parting gesture, I left him a five-gallon jug of beer that I did not feel qualified to transport across the nation. It still had a week or so to go in the jug, then another few weeks of aging in quart bottles, after which it would have had a flavor to rival the nectar of the gods. Willard's only task was to bottle it and leave it alone until it was ready to drink. Unfortunately, his thirst threw a heavy shadow on the schedule."

You can imagine where it goes from there. Well, actually you can't, like so many of Thompson's stories, but the point is that the tale illuminates some of our wonderful homebrewing roots. Next time I'll tell you all about how Winston Churchill used to ferment Hawaiian Punch in his closet.
Posted by Tom at 7:56 AM