Mysteries of the Yeast Starter Revealed 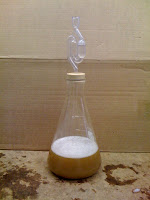 A yeast starter is fundamentally an aerated sugar solution given to the yeast that allows it to eat, grow, and reproduce. A higher number yeast cells are going to greatly benefit your beer. Under-pitching your yeast can lead to stuck fermentations, stressed yeast producing off flavors, or increased lag time where bacterias can take over your wort.

Wyeast smack packs are rated up to an OG of 1.060. I'm of the opinon that almost every beer should get a starter, but definitely anything above that should either get a starter, or be pitched with two packets of yeast. In the end, you're going to save yourself a lot of money by making starters and not spending an extra 6-plus bucks every time you brew a big beer. Anything over 1.080 should probably get three packs, or a huge starter.

Recently, we here at the Grand Ave store brewed several test batches that needed yeast starters so we decided to document the process and provide some visual aids. ry Malt Extract (DME)
You could really use any sugar you wanted to when making a starter, but in the end, dry malt extract is going to be the easiest to work with. Here's some quick and easy math for you.

The idea with the yeast starter is to give the yeast plenty of food to multiply, but not too much to stress them out in a high sugar solution. Shoot for something between 1.030 and 1.040, so 3 to 4 oz of DME in 1 liter of water. Your yeast will thank you.

To make bigger starters, just extrapolate from above. A 2 liter starter could take between 6 and 8 oz of DME. A 3 liter would get from 9 to 12 oz, etc... 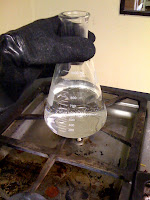 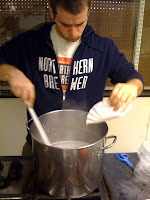 r Extract and Boil Your Wort
This is one of the reasons we suggest using an Erlenmeyer flask. Remember in chemistry class when you'd boil some caustic solution on a bunsen burner? And then you'd take off the hose from the table mounted gas shutoff and use it like a flame thrower? Remember sitting in the principle's office and going home early? No? Hmmm. Anyway, Erlenmeyers can be placed directly on a flame, and then plunged directly in cold water without cracking like untempered glass.

Because of it's lack of moisture, DME actually stirs in better at lower temperatures. Steam from the boiling water can cause it to clump as it goes in, and make it harder to dissolve which could lead to some scorching. In a small opening like an Erlenmeyer flask, a clog is almost inevitable if you add the malt too late after starting to heat the water.

In our case, we were making several large starters at once, so we used a large stock pot to make the wort, and then split it into different flasks. For your purposes at home, preparing a single starter in the flask works just as well. 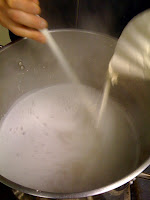 Make sure you dissolve all of the DME into the wort. Undissolved DME can fall to the bottom of the kettle and scorch. Depending on how you pitch your yeast (more on this below) this won't necessarily affect the flavor of your beer, but it is going to affect the amount of fermentable sugars in the wort for the yeast, and isn't that the whole reason you're making this thing in the first place.

When making the starter in the flask, vigorous swirling as you add the DME should be enough to dissolve it. 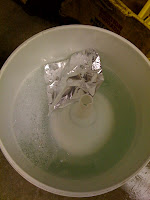 r Stopper (and possibly your funnel)
Once the boil is over, sanitation will be paramount. But before we cover the flask with a stopper for the cooling or the wort, we're going to have to explore some laws of thermodynamics.

If we were to use a regular air lock during this process, liquid from the lock would get pulled into the flask. It's not the end of the world in small amounts, but I think we can all agree that this is not ideal. 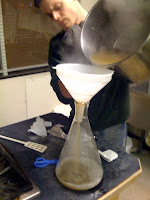 As an alternative, consider using some sanitized aluminum foil wrapped tightly around the top of the flask. Or a foam stopper which allows for the passage of air in and out of the flask, but helps filter out bacteria and other airborne particles. In this case, we've used the sheet of aluminum foil.

If you didn't boil in the Erlenmeyer to begin with, you're going to have to transfer to it now. We suggest a sanitary funnel, some heat resistant gloves, and a small prayer. Watch for spills! 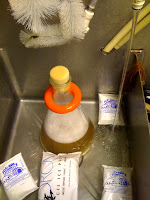 Just like when making a beer, we want to cool this wort as quickly as possible. Here we've prepared a nice little ice bath in our sink. As stated above, Erlenmeyers can be placed directly from flame to ice with breaking, so feel free to throw that thing right into that that bath (note: you should probably place it gently in the bath instead of throwing).

You'll notice in this picture, we're using the foam stopper and a flask weight to keep it submerged. Being less dense, the hot liquid is going to want to float in the bath so unless you want all that earlier work wasted, get yourself a donut weight.

As they say in engineering, the more intimate contact the better (who know they were such a sensitive bunch?) so make sure to submerge as much of the flask in the bath as possible. More contact means more heat dissipation means faster cooling. Occasional swirly of the flask will make sure to help distribute the wort in the flask, equalizing the amount of time different portions spend in close contact with the cold glass.

We'll know we're done with this step when the flask is cool to the touch. If you're worried about the temp, use a sanitized thermometer to check it. 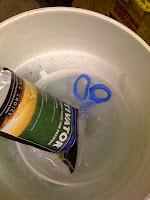 the Yeast
If you're using a Wyeast liquid strain, you should have smacked your yeast pack before starting the endeavor. If you're using a dry yeast, you should start rehydrating it in some warm water while waiting for the wort to cool. This may seem like overkill, but you're going to want to sanitize the yeast packet as well as the scissors you're going to use to open it. Who knows what bacteria is lurking on those surfaces? 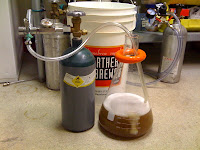 ort
Good aeration is really important. Yeast can't reproduce without oxygen, so we want to make sure to give them plenty of it. You can do this just like you would with your beer; vigorous shaking, pouring back and forth between sanitized containers, aeration kits with diffusion stones, or pure O2. Whatever you've got, make it work for you. Here at the store we have a handy 5 lb oxygen tank with a diffusion stone. For starters and beers, we typically set it at 1psi and let it go for about 5 minutes, or until it starts foaming out the top, whichever comes first. 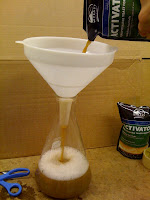 Cut open your yeast pack with your sanitized scissors, and using your clean and sanitized funnel (you did clean it after pouring the wort into the flask right?), pour that rotten apple smelling, goopy goodness in there. Cap it off with a sanitized air lock and call it a day.

If you have a magnatized stir plate, awesome. If not, just make sure to give that thing a good shake and swirl every time you walk by. The yeast will start settling out to the bottom, but don't let it. Yeast in suspension will eat more, and in the end reproduce more, which is why we started this whole thing to being with.

Look Ma, I Made a Starter (or three)! 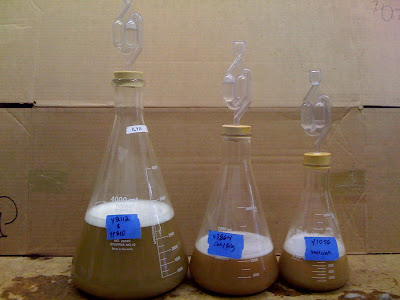 Email ThisBlogThis!Share to TwitterShare to FacebookShare to Pinterest
Labels: fermentation, fundamentals, how to, techniques, yeast